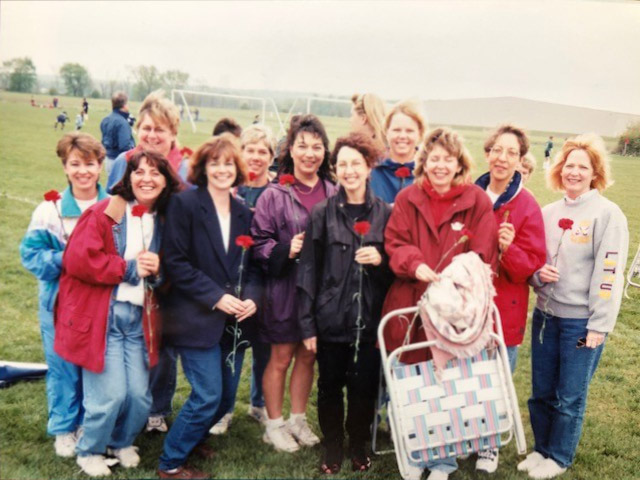 My mother passed away in 1999 – the end of a millennium which seemed appropriate somehow. My mom was born and passed away on the very same day…89 years apart. I think most children would agree the first Mother’s Day without their mom is always the hardest. I typically bought my mom a gift each year but there would be no gift for her this year. I was thinking of what I would do with the money I usually spent.

We had an early morning soccer game for our youngest son Ryan that Mother’s Day. I thought about how all the moms were taking up their day, cold and early (May in Ohio), to watch their sons play soccer. The game was at 8:00 about an hour away from home so most of us were up around 6 am to get to the field by 7:30 for warm-ups. I think it was still dark when we left! On Mother’s Day for heaven’s sake! It was a great example of what mothers do….they sacrifice for their children…they put their children ahead of themselves…..always….their entire lives. This is why we honor them on Mother’s Day.

It seemed to me all those moms deserved a little extra recognition that particular morning. After thinking about it for a few minutes, I thought I’d buy some flowers for the moms on my son’s soccer team. I called the coach (his son was on the team too) and told him I wanted to buy a rose for each player to present to his mother. I explained this was the first Mother’s Day there would be no present for my mom (Ryan’s grandmother).    It seemed like a good idea to brighten the day of all the moms on the team. I asked if we could arrange for the boys to present roses to their moms just before the game began. He agreed and off I went to buy some roses in honor of my and all moms. It seemed a bit odd to me that a store selling roses would be open so early that day but it was Mother’s Day.

We all arrived at the field just as the sun was clearing the horizon. The moms deposited themselves in their lawn chairs totally bundled in gloves, blankets, hats, scarves, sunglasses and boots. On the other side of the field, the coach told the players to each take a rose and cross the field together to surprise, thank and honor their moms for being there on Mother’s Day. The players, all about the same age and size, jogged across the field together in a straight line holding something behind their backs silhouetted by the bright sunshine.

The parents quietly observed the scene a bit puzzled (of course I knew what was about to happen). Before anyone could really figure out what was going on, each boy (young, innocent, smiling, athletic and full-of-life-and-the-future) handed a rose to his mother, hugged her, thanked her for being there and wished her a Happy Mothers’ Day. Teenage boys! It was quite a sight to see. Everyone was a bit stunned at what had just happened.

It was a very special Mothers’ Day and certainly made it memorable for those 12 moms including my bride. Sadly, the son of one of those moms (and the coach) passed away a year later from a tragic car accident…the one we all fear yet somehow accept and survive. At his funeral (his name was Ryan too), I thought back to that Mother’s Day in hopes that the event would provide some comfort for his mother during her grief and on future Mother’s Days. She may still have the rose from that morning…perhaps in a scrapbook. At least I hope she keeps the memory close. I hope it comforts her each Mother’s Day (and her husband too). I hope each mom on that team remembers that particular Mother’s Day. And, I hope all the dads and the players remember it as well. I know I do.

It’s been 20 years since this event. I reflect on it often especially around Mother’s Day. I have no recollection of the actual game…which team won….who they played….or even the score. I just remember bright sunshine, brisk weather and a lot of happy people celebrating Mother’s Day together. Thanks to Mindy Aleman for sharing a photo she kept from that day.